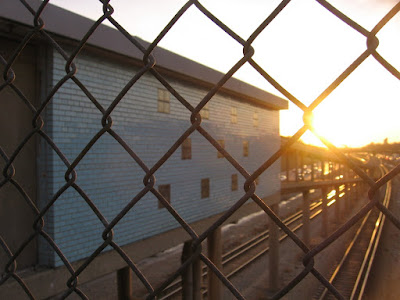 Thanks to the wonderful Chicago-L.org, I learned of six still-existing abandoned CTA stations, and since I decided to visit every existing CTA station, I decided these are "existing" enough for the project. Plus, these are the intersection of my CTA obsession and abandoned building obsession--although I didn't expect to "explore" the stations (and didn't). 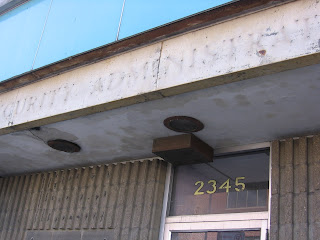 I set out one sunny March afternoon, taking the North bus to Western and stopping to snap a few photos of the threatened (and not especially attractive, but I like having a record so I won't forget what used to be there) buildings near the southeast corner, including this one that had been an Easter Seals building until quite recently. Then I got the Western bus to the Blue Line, Forest Park branch. 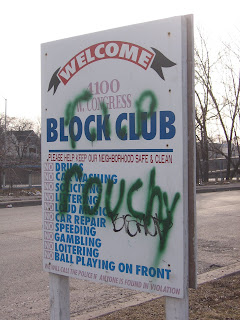 I started off with regular station photos of Western, Kedzie, and Pulaski, some of which I had to revisit in future trips to get anything remotely interesting. You have to work a bit harder on this branch of the L to find good shots, but there's some charming signage, and I kind of like the pastel brick station houses. I left the Pulaski station to walk the half-mile to the abandoned Kostner station, passing an area of block club signs, attractive greystones, and syringes underfoot across the street from an elementary school. 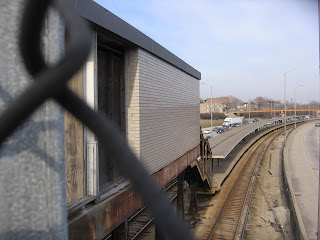 The Kostner station has steps and a walkway that allowed me to stand over the expressway and get shots of the not--too--exciting station house, stairs, and platform. 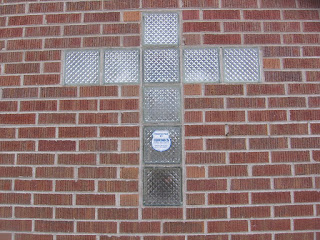 From there, I walked another half-mile to the next open station at Cicero. I somehow got onto Harrison and I believe I saw a stretch of that street I'd never seen before. I definitely want to thoroughly bike the West Side this year--I've done a lot of the South Side in the past couple years (and hope to see all that again, too). Miscellaneous industrial buildings, bars, churches--here's a cross protected by Brinks. 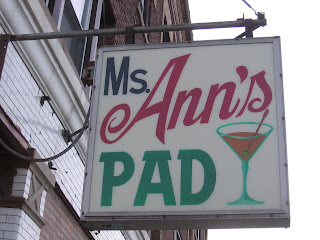 It was quite desolate there, which at least meant no one asked what I was taking pictures of. Signs I like, of course, and cute cats next to empty bottles of motor oil...

I'll have to go back to Cicero to reshoot Belmonte Liquors (which was nowhere near Belmont, needless to say). I got on the train again and got my shots of the Cicero and Austin stations. 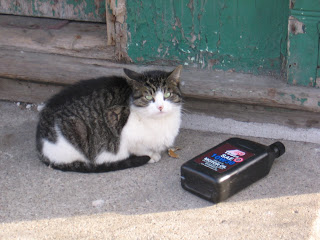 From Austin, it was a confusing trek to find the abandoned Central station. I think the best way to approach it in the future would be heading south on Central, past the oft-overlooked Columbus Park, but on this trip I was walking east from Austin, trespassing an industrial area that was already deserted after 4, making my way over train tracks, some of which I was certain weren't in use, others that were (but not until I was out of the area). 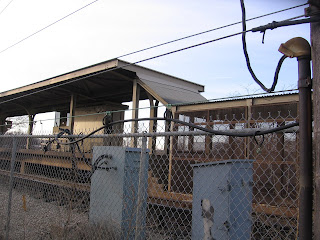 There's no real station house left at the Central station, just a lot of platform area, overgrown by plants, surrounded by graffiti. I got very close. So close, in fact, that I could have gone into the station easily if not for the pesky issue of the electrified rail. I do have my limits. I looked around the tracks for a bit, then took the same path back to the Austin station, well-covered in prickly burrs. 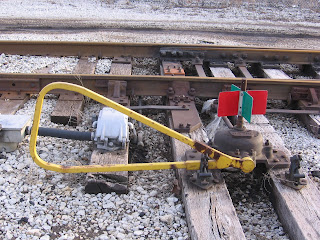 I took the train to Kedzie and just barely grabbed a Harrison bus to the last abandoned station of the day, California. The sun was setting by now. The California station is at the top of this post. I noticed another bar walking north, though I'm certain it's long-closed. I got shots of the signs and as I walked away, a man jumped out from behind the building shouting "HEY! HEY! HEY!" at me. I don't know what that was about, because I pretended not to hear and walked north. In this rather run-down stretch of California, I noticed a fancy mid-century modern furniture store, one of several things I want to come back and photograph. But when I saw the S. California bus coming, I wasn't going to pass it up.

I finally posted this because I'm just about to embark on a walking-and-photography trip that will make this one look tiny and insignificant...
Posted by k of c at 7:44 AM

I am captivated by the long inclined walkways leading from some of the station houses on that line down to the platforms. They'd be so much fun for rolling down in some manner or another.

Have you checked out the abandoned 58th Street station on the Green Line? (I haven't, just asking.) It gives me a chuckle that the CTA is obligated to keep that station maintained merely because federal funds were used in building it.

Can't wait to see what you're up to next!

When I lived in Chicago, photographing all the L stations was a dream of mine. Thanks for living it out. Definitely makes me miss my former home that much more.

I've visited them all, so I did see the 58th St. one. Yes, I've heard that story about how it's maintained...pretty weird. I've love to get to stand on one of those platforms--or go on those walkways--but I'd really have to know someone at the CTA to do that.

Thanks, 54...it was a lot of work but great fun. Actually, I'm still reshooting a few (why does Skokie have to be such a challenge?!) but I expect to have the project finished in a week or so.

What I'm up to next was a big trip I took April 5...quite an adventure...walking, this time.

i commented on your flickr stream once. i'm obsessed by the CTA *and* am starting to be obsessed by the idea of abandoned buildings now that i know so many of them exist ... i'm so excited to know that people are as intrigued with these things as i am.

Cool recap of your trip, and pics of those abandoned stations and neighborhoods they were in! I'm a little more amazed you were able to get to the abandoned Central/Congress station, since I remember several years ago driving by that station going north on Central Ave., and seeing so many weeds covering over where that station once stood. I guess the Central/Congress station hasn't changed too much from when I once drove by it, based on your description of it.

And speaking of Green Line abandoned stations, there also is an abandoned station + station house(along the Englewood/Ashland branch) at 63rd and Racine, and a small portion of the former Wentworth stop remains. The latter, btw, is the one you can see from the Dan Ryan Expressway. I'm not sure if the Wentworth station house is still standing, but I know there's way more info about these stations on http://www.chicago-l.org

Take care, and hopefully I'll be able to get around to posting more pics on flickr this year(I'm prfsnlwannabe on flickr, btw). Your pics on flickr are pretty good, too!

Very interesting, well written site. I'm a CTA fan as well and always liked the glazed-brick late 50's stations along the Congress route. I remember seeing in as late as the early 80's the original block letter signage on those stops (While zipping down the Ike in my car most times, it seems, though I did ride it sometimes).

You may have already seen it, but the WTTW Digital Archives has some great vintage vidclips of the CTA, one in particular showing the dedication of one of those stations. (www.wttwdigitalarchives.com)

The search feature isn't that well indexed yet, but type in "cta" or "bus", and you'll turn up tons of stuff.

thanks for this look at the west side...I live right by the Kedzie-Homan stop and Forest Park line excites me....I am so glad I happened on your blog...

The Kostner station should never have been built.
It was added a number of years after the Garfield Line was moved to the Congress Expwy. median.
Because almost all of the Congress stations had long ramps down to the platform, it was only a quarter-mile away in either direction to another station. Kostner was a total waste of money.

this blog is old but pops up when i google "abandoned blue line stations" thanks for the pictures! i take the entire congress line to work every day and i always sit on the left side so i can stare at these abandoned stations. now i can see them from a different angle. fascinating! i like to think that some violent crimes were committed there or ghosts haunt them which is why they haven't reopened them.

This must be the blue line.

All those abandoned stops on the Eisenhower.

I wonder why CTA decided to shut them down.

Now the CTA has gone ahead and banned all advertisements for video games rated Mature (M) or AO (Adults Only) on CTA trains, busses, and in CTA stations. This ban does not apply to R-rated movies or books with explicit contact.

I think your article is very nice. I will recommend it to my friends.