As promised, some late afternoon exploration at an abandoned, ruined, and since my last time by, partially demolished industrial facility in Chicagoland. Enjoy this horizontal photo; it's the last one you'll see for a while. And all but this one are in chronological order. 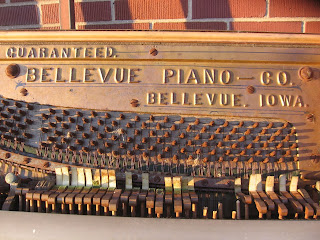 It's an imposing building from the outside. I'd driven by with a friend, but we didn't go in that day. I'd been at the nearby Metra stop, but it was too busy around to try. Finally, Saturday I biked downtown for a bike/Metra trip. 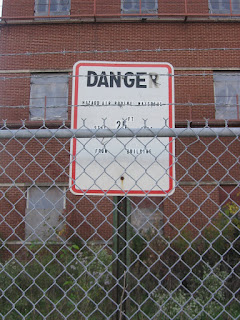 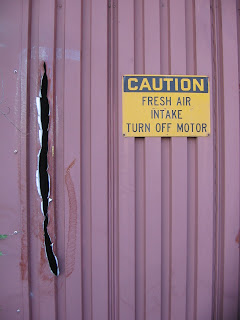 I didn't start off here. I started with my first solo trip to what might be the most fantastic ruin in all Chicagoland (not counting Gary). My trip there with a friend, a year to the day earlier, was incredible. (It's in the archives. Not a story, though; I still haven't written the story from last year; both trips merit their own post, later.) 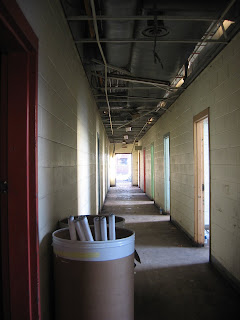 After more than two glorious hours there, I biked to another nearby spot...well, I couldn't find it. I'd never been in. Then I biked to find a place I'd only briefly explored after discovering in the spring. Went the wrong way, couldn't find it either. 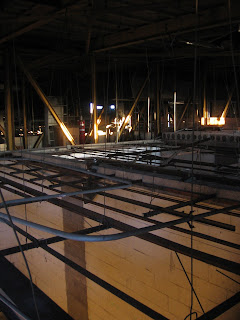 But this site was there, if missing at least one building. As is common for a new place, I went in a more difficult way and found the easy way later. It was all easy, except for the building sealed up for asbestos abatement. I could have gotten in but decided to take those signs seriously this time. 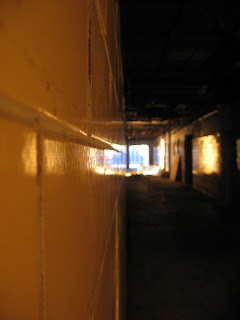 I still had plenty to see, even if much of it was emptied of anything but a few signs, pieces of equipment, and yes, chairs. 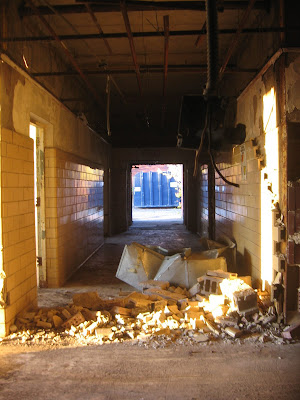 I walked through all of two low industrial buildings, one much bigger, and by then, giving off a beautiful late-afternoon glow. 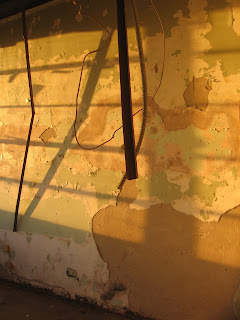 As with most exploration spots I've seen this one in other's photos. But I didn't study them before I went, I wanted the place to be somewhat fresh. 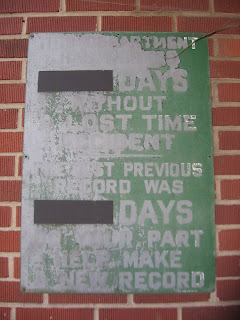 Of course, now a lot of it's missing or less accessible, and I wonder if that's where all the stuff (the research labs) were, and if I should have tried the abatement building, or if it'd been cleared of anything intriguing anyway. 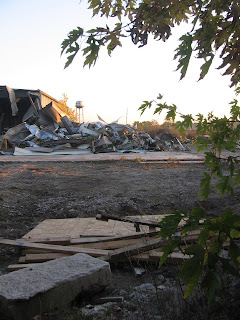 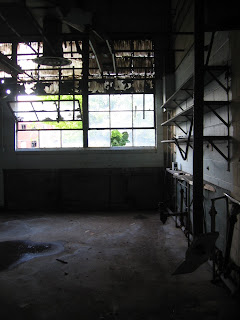 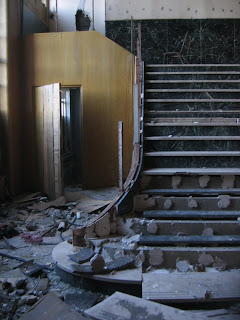 This beautiful stairway awaits at the main entrance (seen in the first vertical photo). I didn't do much on the first floor because of debris blockage. So I went up and zipped through the second and third floors of this enormous building, stopping where it met the sealed-for-abatement adjoining building. 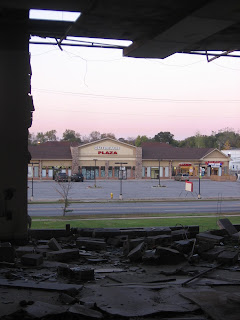 One part is extremely open to the major street in front. The sign across the way says "Outreach Plaza." Outreach Plaza and signs for new condos viewed from this rubble--a little too perfect, another cliche of Katherine's photos! 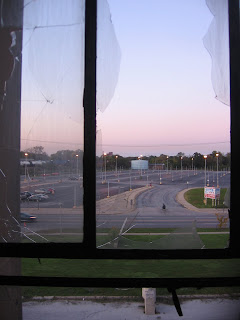 I had more trouble than I anticipated getting down from the third floor, making a dozen or so unnecessary jaunts down this hall or that, wondering where the stairway had gone. I think I handled being alone in a very ruined building I'd never visited before, in an impoverished suburb, as it was getting dark, and I only had a small flashlight, with aplomb, or at least a minimum of panic. (And why is this quality never mentioned in personal ads instead of tedious requests for a woman who's equally comfortable in jeans and a party dress?) Oh, past that door at an angle, there's the stairs. I got out quickly, so exhausted, yet ready for more, I left my bike locked outside that Metra station to come back the next day.
Posted by k of c at 7:33 AM

Now that I see that you bike places, next time you come to Elgin if you're looking for a good breakfast place I recommended biking north on the Fox River Trail & going to Benedicts in Dundee. I'm going to blog about it soon. It's a brunch place that closes at 3 pm.

Thanks, I'll have to make sure I get out in the morning for my next trip (I can see the Village Discount that way, too).

The complex of buildings on 147th Street that warns people away was a laboratory for the Atlantic Richfield company.

yes, it's Arco. I didn't even know what it stood for. There's very little identifying info left anymore.

I first thought that it was a hospital. Never been inside.

I'm a film director whose looking for places like this in Chicago. I live in Chicago and would love to know where exactly this abandoned establishment is.

I wonder also if I could reach out and talk to to you more about the film and a possible collaboration on location scouting.

Tyrone, you should be able to look the location up knowing the name...it's a little outside of Chicago. Don't know if more has been torn down.

I don't know when you posted the comment but if you're interested in more information (about the better-known places around Chicago/Gary) you could reach me at hoydenish [at] aol.com