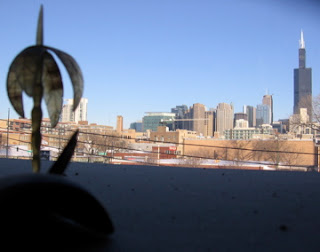 Happy New Year! I hope YOU haven't been disgustingly sick all day like I have. I wish it were a cold or a hangover (actually, I've never had one...I've gotten sick from drinking, but that's different) but it's a bad reaction to some food eaten at a "family restaurant" at 3 a.m. We didn't drink at all on New Year's Eve. I don't think it's food poisoning or the flu, but we'll see. Never say "Greek Skillet" to me again. I can't believe I've had an awesome few days of running around with new friends to abandoned buildings--demolition sites, asbestos, mysterious stuff leaking, icy floors, freezing cold, confronting police, slippery snow everywhere--and breakfast ruined me. 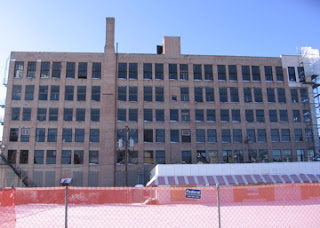 Never mind that; I'm mysteriously all better now as I write this. This here was a recent trip, an unexpected treat after a day of not getting back into a certain hospital, and not getting into a certain school, and briefly getting into a different school. I thought I'd get more outside demo shots like the day before, but after checking around the be sure the south gate wasn't open and there were no workers, it was amazingly easy to slip into this place. If you didn't mind being seen by moms picking up kids from a nearby dance center, that is. Oh well. 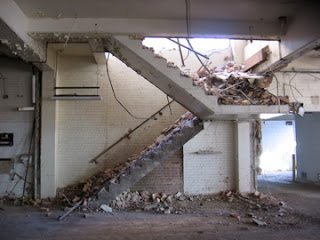 My target was the big and mostly-intact building seen above. I had to cross through a building that was relatively far along in its demolition. It would have been nice to see more than one level, but I didn't feel like navigating stairs like these. 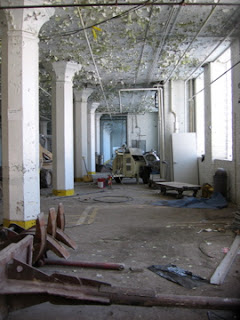 So I'm in the other building, enjoying the columns, and the assembled equipment. I found the stairs--several good options in this building--and set about visiting every level. I'd gotten such an early start and failed at nearly everything else, so I had a couple hours of daylight left here. 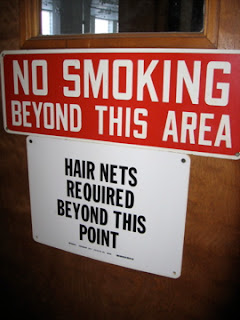 There wasn't as much signage left here as at that other big closed candy factory, but still some admonishments here and there. 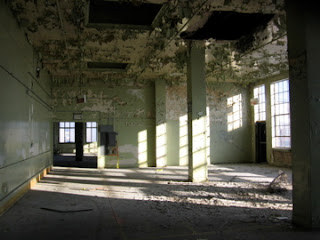 This was one of the higher levels. I couldn't get enough of this room; I photographed it at two different points on this trip. I loved the seafoam green and the shadows. 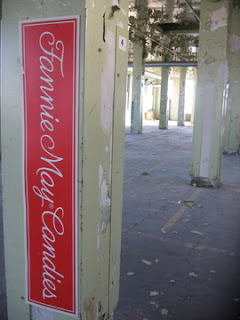 More light green, and--oops, I've given away what factory this is. I knew this company was in Chicago, of course, and I'd heard about their troubles, but I'm sorry I didn't really know about where their factory was located (so close to downtown!), or visit their adjacent store. 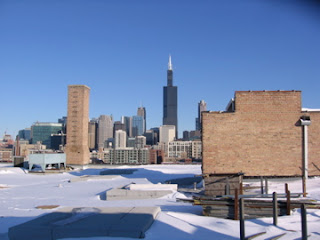 I zipped through all the levels and of course had to see if I could get on the roof. Indeed I could, but this was so close to downtown, so surrounded by occupied structures, that I didn't feel comfortable doing more than stepping out for a couple quick shots. I hadn't seen any sign of security, or workers, or dogs, or anything, but would this luck last? (That's some clumsy foreshadowing there, huh?) 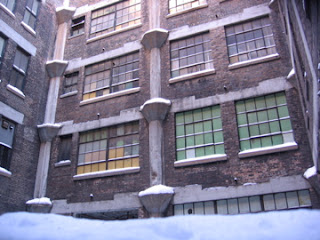 This building was bland from the outside; only by exploring did I get this delightful surprise--not only were there several pale shades and different styles of columns on the inside, but one side (and only one) of the building facing the courtyard had the column motif repeated on its exterior. 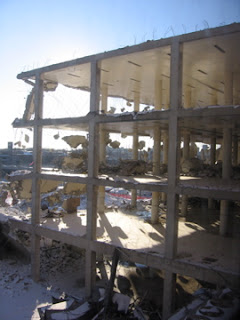 I went through all the floors, the roof, the basement (briefly, as seeing basements alone still scares me), and got shots of the demolition going on across the way. I was back up on a top floor and saw a vehicle moving outside. Um...that wasn't there before. The gate was open. I went back to the first floor and heard voices not too far away--outside, or in the demolished building. Definitely workers. Should I sneak out, and play clueless art student if anyone caught me? Instead, I snuck up to the 3rd floor office suites, crouched down, and called my friend Mike. 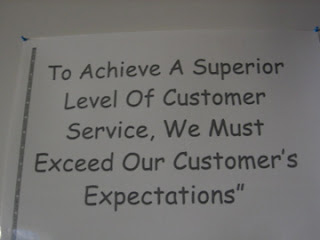 "The good news is, I'm not stuck in the building that's getting demolished..." I didn't have any explorers to call--a friend was out of state (actually, I found out later he wasn't, but never mind), so it had to be Mike. He was at a bookstore and couldn't really talk. I heard "My friend is trapped in a building!" and he hung up. I waited it out. They'd leave by dark, right? Actually, they left minutes later, after I'd had more time to explore the offices and note the motivational material. At the risk of being pedantic...where do the quotation marks START on this sign? 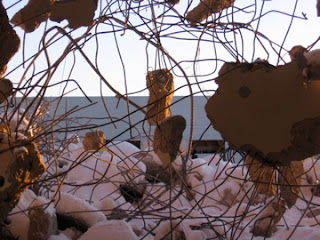 No vehicles seemed to be moving. No voices. I just wanted to leave. I went back to the first floor--oh, there's my flashlight, hope no one came by and noticed it. I battled my way out through this mess--uh, no, I just walked through a door into the clear part of the demolishment again, and hopped out into freedom. I called Mike again, and went downtown to sit at the Borders on Michigan, enjoying a Cocoa Trio and not looking that much dirtier than the average person who'd been through the Chicago snow/slush that day.

Admittedly, this factory didn't have THAT much to it, but it was beautiful to see an abandoned building that wasn't totally scrapped and trashed, and had virtually no graffiti. And have it all to myself. Mostly.
Posted by k of c at 7:44 PM