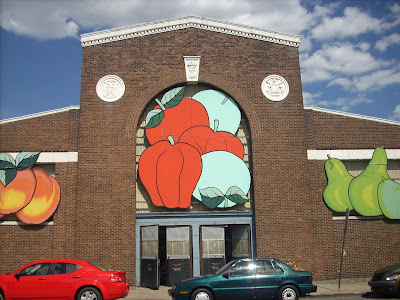 The much-delayed follow-up to Detroit afternoon, part one (which has now been pushed off the front page here). Delayed even further when one accidental cut-and-paste meant half the photos and the first 9 paragraphs of text (which took me about 3 hours...see why I don't do more long posts?) completely vanished and "undo" did nothing. (In the early days of this blog [2005, though hardly anyone I know now knows the pre-2007 version], I'd press something wrong and a whole post would disappear; adding the autosave feature was a vast improvement...until it autosaves your terrible mistakes!) 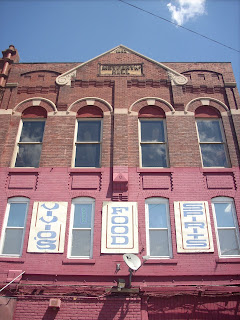 These photos are from mid-August, my fifth visit this year and the most recent when I'm posting this, with probably the best weather of any of my trips.

I admit my initial attraction to Detroit was its status as the abandoned building/ruins capital of the central U.S., if not the whole country. But I've made it a point to seek out unabandoned, even thriving, places on each visit. Still, I did start this day checking on a vacant place I'd noticed on the prior visit. I couldn't get in and had to content myself with sitting across from it, soothing the defeat with chili cheese fries and coffee from American Coney Island, at 7 am on a Saturday. Moving on, I made my third trip inside Michigan Central Station. An abandoned building I'd noticed nearby was "open" for the first time I'd seen it, so I had a brief excursion there. I hadn't found a way into MCS the previous visit but it was easy enough this time, if I didn't mind getting a little dirty. Surprisingly, a photographer I saw on the ground floor was the first person I'd encountered in there; the second was across from me on the roof. I went up for ultimately disappointing shots of Tiger Stadium (far along in its demolition by then) and noticed an explorer-looking guy. I went over and we had a brief friendly chat. "I don't run into too many women alone up here." I imagine many have thought this about me, but he was the first to say it. 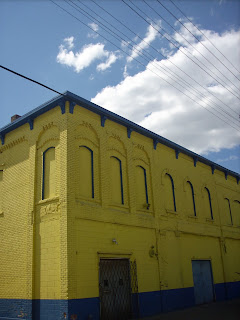 Leaving coated with a fine misting of grime, I hurriedly walked from Corktown to downtown, Campus Martius, where Preservation Wayne was conducting one of the four walking tours they offered that day. I paid my $10, a few minutes late. Surprising that though all my Detroit visits were ostensibly about architecture, I hadn't gone on any official tours. I chose downtown because it seemed the most "basic." At around three hours, the tour was too long for my taste (nearly all of the Chicago Architecture Foundation's walking tours are two hours), but I wasn't bored. I threw in a few bits of info that I knew (without sounding like a know-it-all, hopefully). And I saw pockets of downtown, particularly east, that I hadn't seen before. The tour ended in the fantastic Guardian Building, in the Pure Detroit shop. I'd wanted to buy a Detroit t-shirt that was neither sports- nor crime-themed, and there they were. I got a beautiful blue "Enjoy Detroit" t and crossed the lobby to a fancy coffeeshop, the store clerk following to serve as barista (this WAS downtown Detroit on a Saturday). I now have a punch card for the coffee place (the Rowland Cafe). 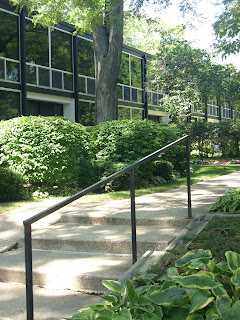 I've needed to make contacts with Detroit people besides urban explorers, and Michelle Lynn on Flickr is one. She suggested a number of places to visit, but the only one I made it to was the Eastern Market. It took some doing to get there from downtown, even with my map and directions from the tour guides--Detroit's diagonal streets trip me up. Mildly lost, I stumbled across a beautiful apartment complex, and noticing a historical plaque, was surprised to learn it was a Mies van der Rohe project I hadn't even known about. Lafayette Park, which is a National Park Service Historical District. I'm not the biggest van der Rohe fan, but this was impressive. 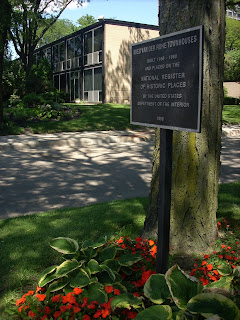 Much of the way, I was still tackling the coffee (a large hot coffee in August? why?) and something that almost made the entire visit worthwhile, a waffle cone of key lime pie ice cream from Happy Cream, a delightful ice cream shop/cafe on Monroe Street downtown. Worthwhile because I'd noticed that flavor on my first visit, but they were out. And out on my second and third trips to the store. Yes, I visited Happy Cream on 4 of my 5 Detroit trips. And I had to bravely endure other flavors before getting to key lime: pineapple upside-down cake ice cream, banana pudding ice cream, strawberry cheesecake ice cream. (I assure you, they have flavors that AREN'T based on other desserts. But I hope they have pumpkin pie ice cream for fall. And wow, if anyone could come up with a tapioca pudding ice cream, I'd totally endorse it. [Said knowing that my level of celebrity is roughly commensurate with the popularity of tapioca pudding.]) 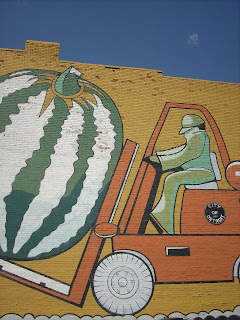 So, the market. First I noticed the beautiful buildings--including those in the top 3 photos, and this one with the mural. Then the produce. Oh, I couldn't believe I'd missed this on my previous Saturday visits! I'd only vaguely heard of it before. Some of it is a farmer's market, with locally grown/produced food (lower prices than Chicago markets, needless to say). Some of it is a produce market with conventional produce at good prices. I couldn't believe I could get a package of blueberries for $1, which I ate that afternoon. I was upset to think I had a bus ride in hours, with miles of walking before then, and couldn't buy much. I need to visit, buy a ton of produce, and stay at someone's apartment and cook a giant dinner... 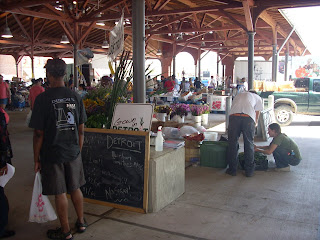 I ate lunch at a restaurant Michelle had mentioned, one of the very few sit-down restaurant meals I've had in Detroit. And I had a salad, when nearly all my Detroit dining had been hot dog-, pizza-, and ice-cream-based. I went to a variety store/gourmet market and bought some coffee, chocolate, etc. They had an amazing selection of Arcadia Publishing books, and I bought my friend's book about Kalamazoo, his hometown, which was out of stock when I placed a giant Arcadia order (mostly Detroit books, which did come in handy) in January. 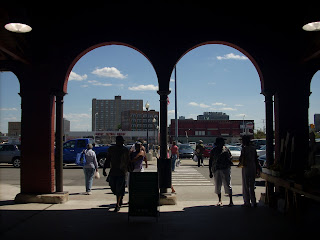 Kalamazoo came up the other day and I babbled about how they'd had a variety of industries, including celery, and corsets. (You can tell from my blogroll or Goodreads how much I'm interested in industrial history, especially of the Rust Belt. I just don't think anything I'll learn will seem more fascinating than that Kalamazoo was once called the "Celery City.") 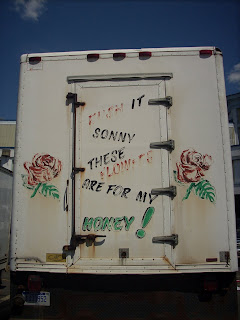 I'd forgotten the other day (I did read the book soon after buying it) that they were also known for Upjohn pharmaceuticals, Kalamazoo Stove, Checker Cab, and the major industry, paper mills. (Oh, wow.) Back outside, I found a booth with more great Detroit shirts, but couldn't justify buying more that day, even if they were 2/$35. I'd already done much more shopping on this trip than most. I left the market, walking towards Woodward. 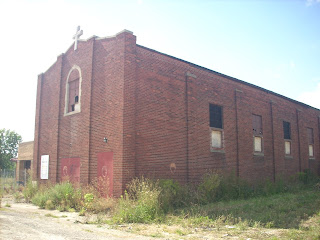 And then I stumbled across the abandoned public housing project, subject of the earlier post. Only a few blocks from the fancy salad and gourmet grocery and organic locally grown produce. 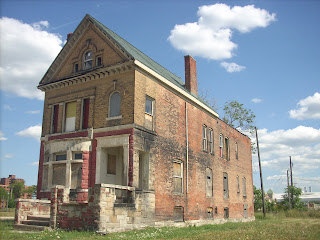 Moving on, I was in the land of buildings standing alone, surrounded by vacant lots. I saw this church--not the best photo, I know. First I went into the ruined structure to the left. I couldn't get into the church itself, but attracted attention wandering around. A woman drove up and asked what I was doing/where I was going in a concerned-seeming way, then added an odd remark that I should get photos of the church because it was going to be burned down. And there was this house--abandoned but charming. 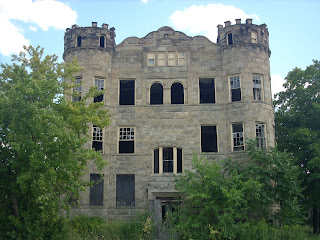 A little further, and I found this lovely castle-esque apartment building. Not difficult to get into.

But rather frightening once you're in. No sign of recent human activity, obviously no security...no, like most abandonments I've explored in Gary, this is one where the biggest risk was the building itself. 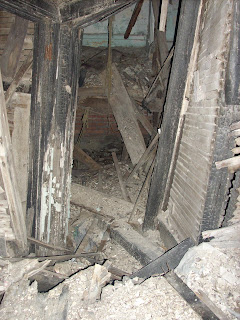 There's no longer much distinction between the ground floor, upper floors, and basement; floors have collapsed on each other. 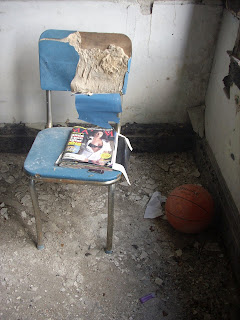 I did tentatively go upstairs, but didn't get too far once I was there. I left the empty can of the San Pellegrino Limonata I'd gotten at the gourmet store, as a weird, obnoxious gesture, I suppose. (I've left an empty Izze grapefruit soda bottle, purchased at Starbucks, at the abandoned silos in Chicago.) 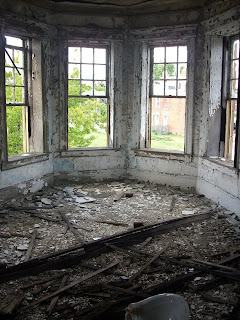 The place had nice windows, anyway. But I needed to move on. And I did. I was right near Woodward, and ran across another gourmet market, one I'd passed without ever visiting. I wanted more food for later, and bought containers of edamame-tofu salad and glazed sweet potatoes from the deli. Now, Chicago has ruined buildings and empty public housing and Chicago has produce markets and gourmet stores. But they aren't a couple blocks from each other the way they were that Detroit afternoon. The "castle," a dangerous ruin, was literally surrounded on all sides by rehabbed houses and newly built homes. The mind boggles. I'm not bashing the place--I love abandoned buildings and I love gourmet vegetarian treats and it's certainly convenient to find them a couple blocks apart--I just wonder what people who live there think.

The day went on for hours more but I'll leave it here for now. With my favorite find, though certainly not best photo of the day, from an area in the Eastern Market vicinity that reminded me of Chicago's Maxwell Street Market. In the midst of vast displays of unofficial Barack Obama t-shirts, and beauty products, and framed posters, this juxtaposition. (I wound up posting it on Flickr on the anniversary of the "I Have a Dream" speech. If Hello Kitty has a dream, she's having trouble telling us.) 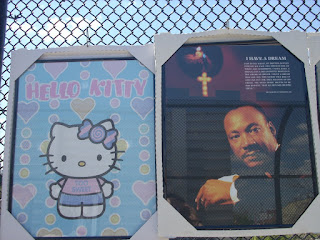 Well, the wait was worth it. Great post! I always wonder when I see nice, or at least new, houses and buildings right near abandoned ones, what the people who live there must feel about that. I wonder if they enjoy it like you do :-P

That about covers it - great post. You can go from Eastern market to the empty lots in Brush park to Zaccaro's on woodward to the burnout of Cass in about two minutes on a bicycle but there's a certain risk of mental whiplash if you go too quickly :)

And the comment about the building being about to burn down was likely spot on. Two of the remaining uninhabited properties in Brush Park have burned down over the past 6 months. It's hard to assign the usual explanation of the homeless trying to keep warm in high summer - more likely next year we will hear that some of these remnants of the brush park of old 'went on fire' (as they say in glasgee).

you were in our neighborhood--- the mies low rises.