On dressing up again

A lot has changed since I last wrote; I hit a milestone age and I wanted to do at least one post while at that age. I've also had two Chicagoversarys, my 21st and 22nd (I moved here August 11, 1995). I'm about to hit ten years on Flickr (August 30), which also marks ten years on ANY social media (I only had email and this blog before that, a world I can barely recall). Which is ten years with photography as my main interest in life, even if the things I obsessively spend my time seeking out and photographing, and the people I do it with, have changed many times. But wait, I wasn't doing the Flickr reminiscing yet, I wanted to talk about something I did on Instagram, which I finally joined in late June this year. And IT'S changed my life, though nowhere near as dramatically as Flickr. It's more a process of accelerating things I was already doing, and giving me a place to focus on them and get feedback. 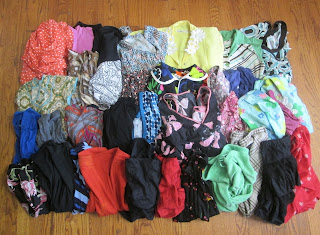 For example: Skirt Month. In July I pledged to wear a skirt or dress, preferably a different one, every day that month, and post a photo on Instagram. I'd done this for a week in spring (before IG). I succeeded in July, too, and later took this photo of every dress and skirt I'd worn. It's more than 31 because I own more than that, even just of summery clothes, and some of these outfits were too fancy or weird to wear an entire day!

What motivated this project?

1) I had tons of stuff I hadn't worn in months or years or had forgotten about entirely--I started searching my deep collection of vintage clothes, still bagged since I moved...years ago, late in the month, and found some great ones like that black with floral print and huge collar mod dress--and this would help me rediscover these outfits.

2) I was starting to enjoy posting photos of myself online again. After only a handful of self-portraits (I've done them on Flickr since long before "selfie" was a common term) on Flickr in the past few years, plus occasionally changing my profile pic on other social networks, Instagram had me posting a lot of photos of myself. Sometimes my IG is 1/3 or more photos of me...though it's settled down since July. (Until I do another daily project: my city/neighborhood/sports/band t-shirts?)

3) Some of those older pictures, taken by me or photographer friends, were more...adventurous than anything I'd posted in a long time. Wearing vintage slips, tights...I don't think I'd even worn fishnet stockings (still not a common item in my wardrobe) in a few years. I knew I had friends who appreciated these photos and I was finally willing to put up with encountering random online people who would too.

4) Mainly, it was a challenge to simply dress like this again, aside from photos. A little of it was anxiety about my weight and appearance, but much more, it's about things that are hard to discuss. That wearing anything tight, short, revealing, and/or just really bright and noticeable was hard for me. That I've felt uncomfortable for a long, long time at being LOOKED at. That although I haven't shut down from my body, I've wanted to shut off certain kinds of attention. That it felt unsafe.

And no matter how much you know rationally that clothes don't cause assault or harassment, it can FEEL unsafe to wear them. Maybe you don't avoid them because you actually think you'll be safer, but because you fear the blame of others if anything happens. This was a heavy thing to have on my mind this summer, but it was there. And I made it through. Going to festivals and bars and coffeeshops and on the CTA and riding my bike in these outfits (there's a few I couldn't ride in, but I could do most!) was okay and I got almost no negative attention.

5) And yeah, it felt good to get a lot of social media compliments again. (Honestly I was disappointed how few comments and compliments I got from friends and acquaintances in person, but oh well, the next day I'd get that online. A lot of people haven't seen me dress like this in a long time if ever; maybe it was startling.)

So I wore everything in that photo and had a few more summery things I didn't get to because they didn't fit quite right or were a bit too formal. The majority of items above were from thrift stores over the years, nearly all for $5 and under. A few cost a little more at vintage stores, and a few are sale items from Target and Old Navy.

If you want to find the photos, they're all on my https://www.instagram.com/kofchicago/ tagged #skirtmonth
Posted by k of c at 10:51 PM

If a realtor has been living in your community that where your real estate home is located, then it can significantly help in how he or she markets and offers the home to other potential buyers since he or she
asikqq
dewaqq
sumoqq
interqq
pionpoker
bandar ceme
hobiqq
paito warna terlengkap
http://199.30.55.59/asikqq78/
data hk 2019